Avast ye Landlubbers there be whales about these shores

Yarrrrrrrr, today had been International 'talk like a pirate day' and I been celebratin it in true pirate style yarrrr.

We had a good ol' beach clean up 'n' survey this mornin for the MCS Big beachwatch weekend at Seahouses 'n' on me way back I called in to see Marta and the other scurvy sea dogs o'board the good ship Glad Tidins (I, II, III etc) n they be tellin me that the humpty-backed whale that was scarin the Pirates near the Farne Islands last weekend ad bin seen again bout Newton Point Yarrrrrrr. The good ship Glad Tidins V wi Captn John aboard ad gone off in search o' the scary beast.

So a whale twitchin I did go, the wretched creature 'o' the deep were nowhere to be seen tho, some landlubber might 'o' been seein seals 'n' should be keelhauled at dawn from the back 'o' Glad tidins if he be mistakin arrrrr

So to Druridge I did sail for there was litter to be counted there too, and as me 'n' me pirate wench av adopted that there beach we 'ad work to do. 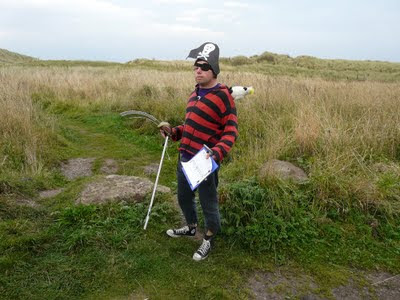 The pirate fun didn't stop there though, no mistakin, when the sun set across the western skies, the salty sea dogs ventured inland to Morpeth Town where many flaggons 'o' ale n rum were downed along wi th best catch 'o' the day arrrr there were some mighty fine pirates aboard and some pretty pirate wenches. There'll be pictures 'o' the swashbucklin on ye olde facebook pages no doubtin'.

A mighty fine 'talk like a pirate day' be had by all. ARRRRRRR
Posted by Ipin at 00:07

The resemblance to a certain Captain is scary, more Pugwash than Jack methinks.

Are you on drugs?

Not a bad effort.... but I've seen stranger things at Druridge !!

I agree with newton, seeing someone like that, passes for, run of the mill.