One up, One Down

I managed to catch up with a species I missed today at Druridge, Ian fisher had seen Curlew Sand on Wednesday in front of the Oddie Hide, today there was one on the far bank with a greenshank - ONE UP!

I did go one down though, Janet was ringing yesterday whilst i had to slave over a computer in my office all day and she caught a spotted flycatcher which would have been a year tick for me - ONE DOWN! 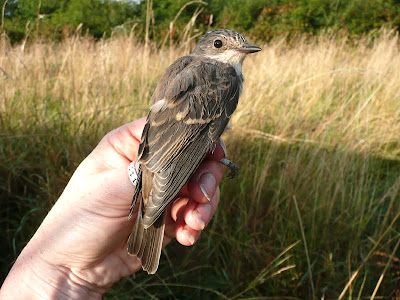 I had two visits to Druridge today, the first visit was this morning, well it was nearer lunchtime once the hangover had disappeared a bit. There has been a sudden increase in the number of red-throated divers offshore, there were at least 16 in the bay, also 4 goosanders.

As well as the curlew sandpiper on the big pool there was a greenshank and a juvenile little grebe which I am not sure if they have bred at Druridge or it has come in from elsewhere.

This evening we went for a walk on the beach, there were at least 25 dunlin and the same number of sanderling, making the most of the chance to feed now that the plebs enjoying the autumn sunshine on the beach had gone home. Some scoters had also appeared which will need to be checked tomorrow.

Hopefully if th ewind doesn't pick up we will be ringing in the morning, you never know I might even get spotted fly back?