Ringing briefly with JF before work this morning, we only caught a wren and a robin before I had to go to work. JF had better luck later catching 13 long-tailed tits and a great spot. While we were loitering between net round we had ten xbills over, which went south to be joined by 4 more in the pines, they flew off south when I went for closer look. There were also about 140 twite in the pines with 90+ goldfinches. 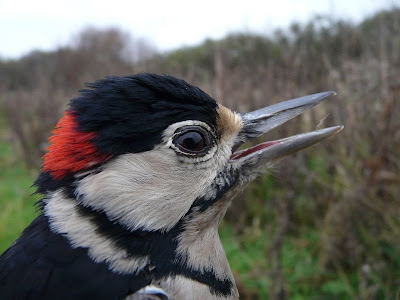 The wind was from the NE with missly fog at times. There were newly arrived blackies in the bushes, but we didn't catch them. It's been a poor autumn for thrushes, with hardly any at Dru and catching even less!

Tomorrow could well bethe last easterlies of the Autumn, the long term forecast on metcheck looks like westerlies til the end of the month, so I am making the most of it and have taken tomorrow offuv work....fingers x'd!
159 crossbill
Posted by Ipin at 21:22