The first real winter weather this weekend, I had to work yesterday, taking a couple of journo's for a walk around Howick and Craster, not much opportunity for birding though (I was at work after all), because of the extreme cold and wind, we had to retreat to the ship at Newton for lunch - tough! Did have a peregrine at Cullernose Point. Below is the Bathing House from the south and Cullernose Point with Dunstanburgh Castle in the background. 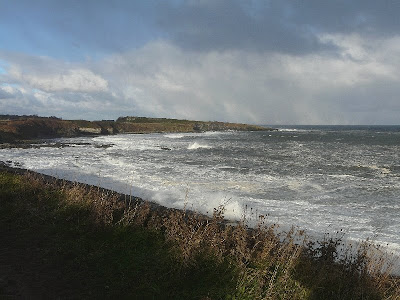 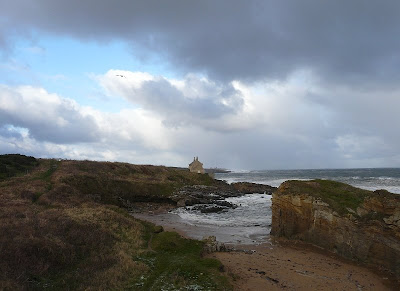 At Druridge this morning there was even more snow but it was nice and bright. We did the WeBS count and just wandered around the patch. There were geese and swans on the move, mainly south, but the whoopers seemed to be all over the place, making then difficult to count, there were at least 30 though, I managed to catch this lot going north by Chibburn Farm. 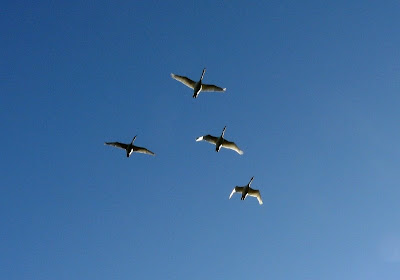 On the pools, the wigeon and teal numbers were up a bit with 50ish of each. When we arrived at Dru I predicted that today looked like a good day to finally nail peregine for the year and I was right. As we wandered towards the haul road, the waders, gulls and starlings on the fields to north all went up in a chaotic swirl - it had to be a peregrine, it was! In the sunshine it looked incredibly bright,an adult male judging by its size chasing golden plovers, it failed and went to sit in the middle of the fields, too far away to photograph. I've been waiting for one of these all autumn having failed to see one in the spring (when they are trickier), I thought I would dip, only to see one on in the first January visit.

As we walked towards Chibburn Farm, it came back over the fields containing some of the 250-300 golden plover, 200 Lapwing and 200 black-headed gulls along with starlings, corvids and other random gulls. 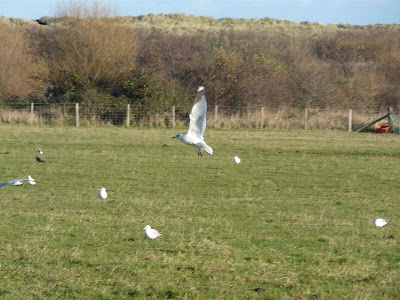 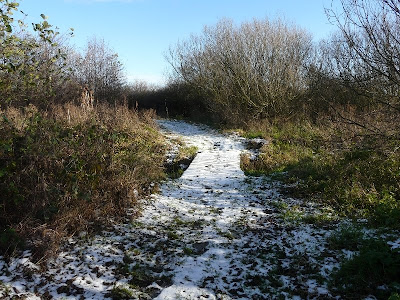 In the bushes there were quite a few thrushes, dunnocks, robins and wrens, nothing out of the ordinary. We called it a day at half one and retreated to the tearoom at Widdrington Village for lunch......