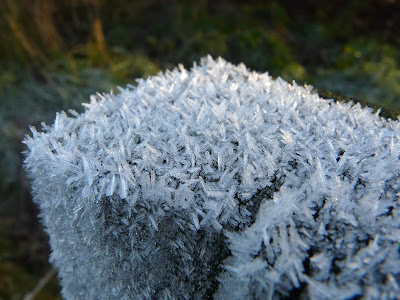 Jack frost has certainly been out this weekend...brrrrrrr.

Sorry for the lack of posts lately - it's hard work during the short days! 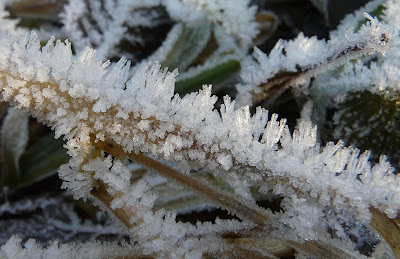 Only got down to Dru briefly this afternoon, had to work yesterday. We were going to trial the big whooshnet today but the ground was so frozen we couldn't get the poles in...oh and Janet lost some of it!

So we had a wander around the reserve and went looking for the elusive twite. We walked north to Chibburn Mouth, but didn't see any and there are no sign of any by Bell's farm. If anybody does come across them, please let me know. We bumped into Stef McElwee looking for the snow goose that has been at East Chevington for the last couple of days. It's an interesting one, it's the same bird that has been at Holywell for the last week or so. It was with greylags (so it's bound to be an escape), it's now with pink feets (so it has to be real)...There were 3500-4000 pinkfeets in the fields north of the preceptory but I didn't see the snow goose - could I tick it if I had?
I've not got it on my Druridge list - I bet a few people have ticked it this weekend?
Stef was good enough to phone me as I wandered off to point out a little egret that had flown south over his head, it must've flown over us too - we saw it flying off over the pines at the entrance, it'll be finding feeding difficult with all the small shallow pools frozdid. 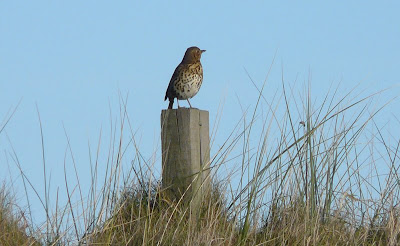 A bit of a rant now, the County Records Committee has booted out our barred warbler record from the floods...grrrrr..it won't be coming of my list though - f*#k em! It would appear that to have a record accepted, one should have attended a two-week creative writing course to enable one convey the excitement of the find, maybe the Bird Club could put on a couple of courses? Not much point in submitting the marsh warbler - lots of singing and brief glimpse - someone else can submit it, it's staying on my list!
And another thing......I get my pager messages via text messages from RBA rather than have a pager, each message costs me about 12p. I have the local channel on in case anything turns up at Dru I should know about. Can I make it clear now that I do not want to know about crossbills at wallsend, siskins at whitley bay, 3 whooper swans at Bolam, pink footed geese anywhere (especially Holywell) and especially not willow tit at Holywell....why do people bother phoning the pager company to put birds like this on?
There are thousands of pfg's everywhere, there are 60 whoopers in Druridge Bay - why do I want to know about 40 geese at Holywell or 3 whoopers at Bolam bloody Lake!
Posted by Ipin at 18:54

You need to calm down. You're starting to sound like me! :)