When I left her at lunchtime, Druridge was virtually an island...The road from Cresswell was totally impassable to normal cars, the road to Widdrington was only just passable to my car by 1220, a bow-wave riding over the top of the bonnet as I went through....Most of Northumberland is apparently under water, it was even difficult finding a route to the Indian takeaway in my village tonight!
So why was I as Dru in such ghastly conditions? Well this weekend was the BioBlitz weekend, I was supposed to be doing a 'Big Sit' on top of the big dune at Dru, but as it pissed it down all weekend with 35mph north-easterlies, that wasn't a particularly attractive option. So we retreated to the (comfort!!??!!) of the hides for the two sessions - Fri 1400-1900 and Saturday 0800-1230. Martin Kitchen, Trev Blake and Janet Fairclough joined in with this lunacy from time to time....none of the 'normal' general public showed up, tho I bet the sign saying 'bird and cetacean watching' pointing towards the Oddie Hide might of confused people. 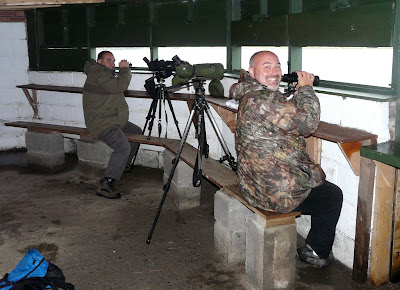 Trev and Martin - part of the BioBlitz team

We were rewarded with some good sightings, and 80+ biological records for Dru...highlights were a juvenile marsh harrier on both days, bullfinch (year tick)and otter. I like the idea of a Bioblitz - anything that sparks interest biodiversity in the County has to be a good thing. 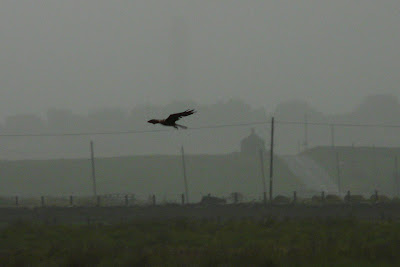 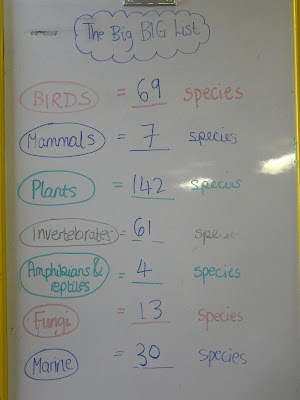 Let's hope the waters subside and I can get to Dru tomorrow morning...there's iccies, wrynecks and flycatchers all over the coast (I was damned certain I had an iccie on the track to the hides this morning - it was calling, but I lost it in the torrential rain)...A conundrum though - got to Tynemouth for red-throated pipit - a British tick (tho I've seen hods of em Europe) or got to Dru and bash the patch......I guess there is only one winner!

Talking of winners - I had to vacate my post at Dru this morning to get my vegetables to the Ellington Miners Welfare Centre, Horticultural Society Show - or the Shur as it is known in these parts. I called by there tonight to see how I had done and have a pint....1st prize for my vegetable marrow (marra) and 1st for my summer turnip....Pics to follow tomorrow (alongside all of the rares from Dru!!)

A carrot or onion yes, a leek maybe but what does one do with a marrow?

Is this in the infamous 'Tute'?

Its pronounced 'chute' to you southeners and you can shove the marrow right up ya... :) :) ( deserves two smilies cos I'm p'ing myself laughing now...)