Back to Dru tonight after a weekend at the birdfair to find the honest romany folk have set up camp after a long absence. It really is great to see them back, they have used their wit and genius to fill in the anti-traveller ditches to set up their pretty little campiste by the dunes.

It's really re-assuring to know that, now they are back, it is once more safe to leave your vehicle, knowing that it will not be harmed whilst you go birdwatching. No doubt our travelling friends will do their utmost to make sure they do not cause any damage to the flora and fauna around their camp and will no doubt carry out valuable conservation work such as controlled burning and scarifying (using their various quad bikes) of dune grassland to improve diversity and halt the spread of invasive species. They will go out of their way to fertilise the trees in the woods with their own excrement, promoting growth and keeping out unwanted vandals and bird ringers. The women will adorn the trees with used sanitary products as part of a traditional tree dressing ceremony that dates back lierally months.

And when they finaly leave us, they will no doubt donate to the National Trust literally tonnes of free tree clippings, hedges and shrubs they have carefully removed from gardens as well as lots of plastic fascia boards, tyres and tarmac they have gathered up as as they go about their honest toil. It really lifted my heart to see them as I drove onto the site this afternoon, it's good to see them back!

So if you are down at Dru, why not call by and see them I am sure they would be over the moon to welcome you into their caravan for a nice cuppa!

Birdwise, Dru was quiet....an adult med gull (year tick) was on beach in a small gathering of gulls and terns, a young merlin flew south past the Budge Screen and 7 arctic skua's and a roseate tern were offshore.

On my way to Dru I spotted Tim Cleaves and Trev Blake at Cresswell Pond, so stopped by, and was pleased that I did. the little stint was showing well on the north side of the causeway, there were also 10 know, 2 ruff, 1 whimbrel, 5 greenshank, 36 dunlin, 2 blackwits, 2 barwits, 2 juv garganey, 3 little gull, 1 little tern and an adult rosy.....not bad eh?

The Birdfair was good, but very tiring. I was working on the Birdwatching Northumberland stand - a consortium of the public and private sector. As usual I spent too much cash on books and drooled longingly at the artwork in the art marquee, the new optics and the numerous destinations touting their wares. A good few northumbrian birders stopped by for a chat which was nice. 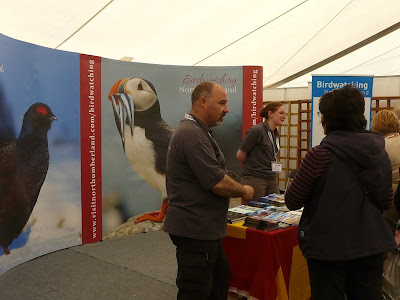 Martin and Sarah on the Northumberland Stand 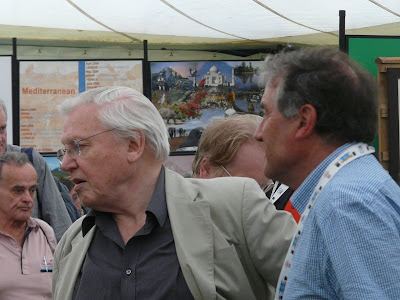 Star-spotting David Attenborough in our marquee with Tim Appleton 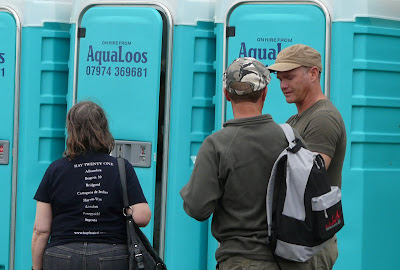 Need to keep your eye to the ground in case you tread in the once contents of their bowells....dirty pikey twats.

Fucking vermin. Where's the napalm. I would eradicate the lot of the bastards in their beds. Good luck with tons of gas bottles bike frames wagon loads of conifer clippings 200+ piles of shite and attendant bog roll. Give me rats anyday...

A snippet of 'Snatch' there NS.

Great film, one of my favourites.

No doubt the council tax paid by these honest, hard working people will pay for the removal of several tons of waste they will leave behind.

Wonder if the bronze bust that was stolen from Ridley Park is in that camp somewhere?