Since my last post I have been off to a ringing course at Catterick Garrison, a fantastic weekend, but hardly any sleep. The course was run at three different sites with a great variety of species, if Carslberg did ringing huts, the centre at the Foxglove Covert LNR would be it.

The whole show is organised by the formiddable (but likeable) Major (retired) Tony Crease with miltary precision. Yhere were miles of nets up, so we caught lots of birds for the trainees to have a go at, I got to ring some great birds but highlights were kingfisher, sparrowhawk and marsh tit. We also had a canon netting session at Teesmouth which was hampered by the weather but we did manage to catch 6 redshank and a dunlin. 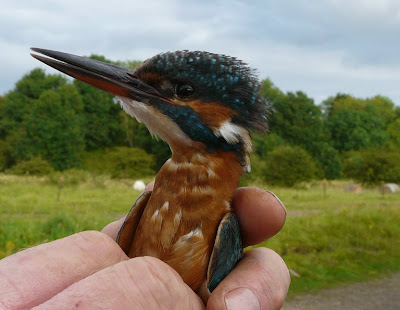 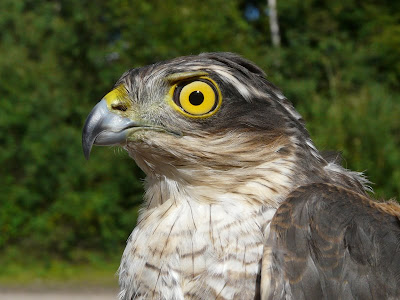 I got a butterfly tick too, with this white-letter hairstreak at Ripon. 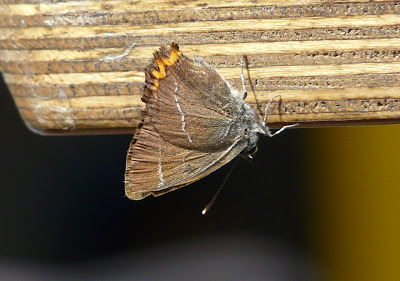 So after about 15 hours sleep in four days, I decided to go out ringing stormies with Ian at Hauxley last night, Trev Blake was along too and we caught 7 new birds and a control, so defo worth goin out, but another night of little sleep.

I had a work meeting at Druridge this afternoon (handy), so spent my lunch break (3 o'clock!) on the dunes looking on the sea, which was as flat as a witches. I was hoping for scoters but there was only a small grop way down towards cresswell. As I was scanning, I picked up a whale breaking the surface, the beast was moving very slowly north, only seldom breaching the surface and not by much, the dorsal fin was big, extending to a point in the middle of the back. Further south there was also a pod of 6-8 white-beaked dolphins and a couple of close harbour porpoise. I phones MSK to tell him, he said he would have a look. I then picked up a small pod of bottlenosed dolphin further south towards Cresswell.

MSK called me back " F#%&*g Hell - it's like the bay of biscay out here......." Martin had seen pretty much what I had, with a few more porpoise, he had picked up a minke whale between Dru and Coquet Point. I have since read some literature and I am convinced that the whale I saw wasn't a minke (I have seen minke before so already had my doubts), the dorsal fin was way to big and upright so i think this had to be a killer whale, probably a female as the fin did taper. It certainly wasn't a minke and no other whale has a dorsal so big in proportion. Unfortunately I didn't see the body as the thing only just breached the surface, so a bit frustrating really.

So it's now 0035 and I am ringing with IF at Chevington at 5am - no sleep again.....and the bloggers not workin so the pics will follow later...

I'm glad to see Major Crease is still in control at Catterick. Me and Boulmer birder have fond memories of a ringing coarse back in the early nineties and it sounds as if nothing has changed.