Well, the trip to Wigan was a hoot, 370 mile round trip (I was driving), 3 piss-head mates who left my car looking like 15 wino-vagrants had been sleepin in it for a month, quite possibly the worst I have seen the toon play in the premiership (certainly since the dark days of Souness) and we were very possibly the last Geordies to arrive back on Tyneside.....still could be worse....could have been at the January sales or back in County Hall!

FAT SAM HAS TO GO!!! - I can't believe he blamed the players for his bad tactics, spineless tosser!

Ok, that's it, rant over...back to birding...Two bullies at Druridge today, a pair, perched on dock just near the entrance to the hides when I arrived, needless to say they had flown by the time I had got my camera and scope set up, but I did manage a crap 'through the twigs' shot later. Bullies are rarities at Dru, so was v.happy to see them - second patch year-tick of the xmas break - Cool.

It was a lot milder so the teal and wigeon have migrated to the now unfrozen wet meadows, not much on the main pool, 140 pinkfoot flew south and 40 greylag north, oh and sprawk went through pushing some siskin out of the wood, I saw another further south at Bell's farm carrying what looked like a stonechat on the way to Dru. 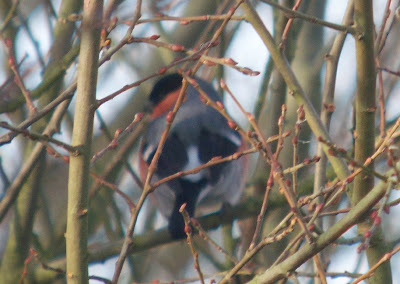 Bully through the twigs

Offshore 4 red-throats were loiterin and one flew north and the great-crested grebe's were still about.

And...the Druridge Grazing Force has been increased, one of the beast has had a calf, maybe this could be NWT plans to restore the grazing to an appropriate level, it may take a few years!! Photo's of the new arrival will follow when they get a bit closer.
Posted by Ipin at 00:01

Bullfinches, 2 male 1 female in the same place boxing day, the highlight of a bad day. Even the otter was missing!

lets hope they hang about for better pics, they are normally like hens teeth at Dru.

No sign of the Otter today but he was showing well on crimbo-day.

Like the profile Photo Iain, a good hangover there I see...

Te result of a visit to some blokes wine cellar in the Czech Republic...can you see Roger laughing at me in the background - no sympathy on these trips!

Non-league football is the way forward Iain - you may still get beat and play like shite but your suffering has cost less and, if playing at at home, you can be in the local in minutes :)