TAC eventually managed to get me to commit to do some tetrads for the BTO atlas, it is difficult to resist forever given that he sits across the desk from me! So today being the last day I had for the early winter visit, JF and I went to do the squares.
We had NT92 L & F, means nowt to most people, both are in the Harthope Valley in the Cheviots, NT92L includes the Hawsen Burn, Cold Law and the valley nearly as far as Langleeford. NT92F is a bit further up the valley and includes Scald Hill and Langleefordhope. I figured they'd be pretty bleak at this time of year but it was great. For the first tetrad JF estimated 8 species, I went for an optimistic 12. JF was spot on, when we had to discount the unidentified passerine, that flew of without calling, never to be seen again.....I reckon it could have been snow bunt, but to be honest it could've been owt. There were plenty of red grouse about and a flock of long -tailed tits in the valley were nice. 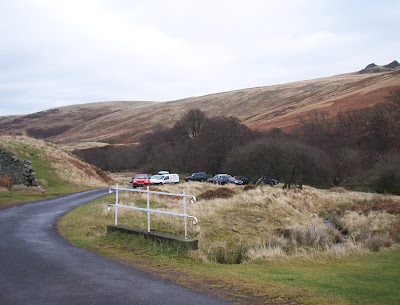 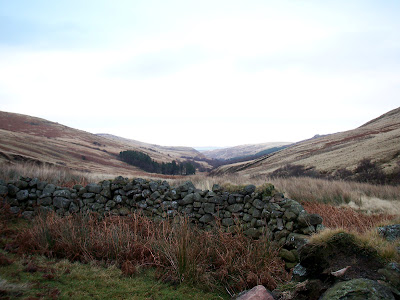 The second tetrad started slowly, but we got a green woodpecker, dipper, goldcrest and 6 black grouse males later on. On the way back down the valley we had at least 130 siskin, then further down, outside our tretrad another 170, these are certainly underestimates, there was probably something like 350-400 siskins in the two flocks....siskin way! 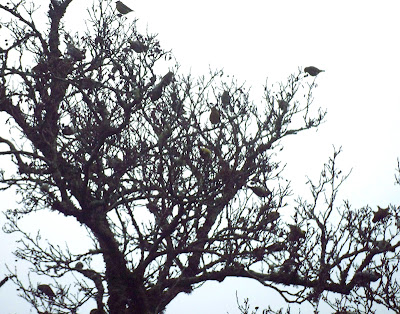 Some of the c400 Siskins, they were a bit like baubles on a xmas tree

Back in the first tetrad we saw loads of birds we hadn't seen during the timed visit (sods bloody law!) including crossbill, grey heron and 5 mistle thrush.

All in all a very enjoyable day, 20 species in total, more than I expected and lobster and trout sarnies, thanks to Janet. It was great to see the black grouse at this site, I have been watching this lek for a number of years now and the population is increasing and green peckers are always nice to see in Northumberland. I am looking forward to doing these tetrads in the breeding season, they should be really good.