To make up for the lack of effort over the weekend (football, vegetable show - I got 1st prize for my onions! Then the mother of all hangovers on Sunday) I made up for it by going to the pools twice today. 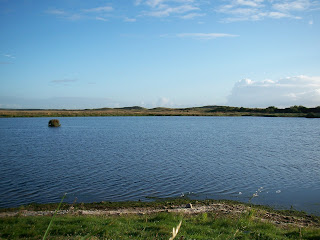 It was a cracking morning, bright but cold with a slight north-easterly. The spooners were on the Budge fields again and a whinchat was perched up. Nothing of note of note on the big pool, about 240 greylag flew north though. A quick look on the sea, six red-breasted merganser were close in and just as I was packing up to leave a cracking pale phase pomarine skua flew south, quite close in my Druridge standards, certainly closer than the farthest pot flags. A quick scope along the inland horizon produced a bird with a familiar dipping flight, it was a good distance away but was a definite great-spotted woodpecker.

6.05pm had me driving to Cresswell and I recieved a call from MSK who was seawatching at Newbiggin, they had had a balearic shearwater close in, the dilemma! Should I go straight to DP and risk missing the bird, head for Snab - I could miss the bird driving south while it flies north or go to the nearest bit of sea - Cresswell Ices - I chose the latter. My choice paid off, by 18.15 the balearic came past close in (if the tide had been out it would have been level with the Carr Rocks). 5 pale-bellied brents and three sooties also past in 10 minutes - Canny!

I headed for the Druridge, with the slim hope I might re-connect with the balearic from the patch. Again it paid off, I was watching a group of feeding terns, a few sooties were going through too, but something was amongst the terns, at first I wasn't sure what it was, but it flew a bit. It then preceded to feed with the terns for 10 minutes or so. It was weird though, it would kinda scamper across the sea, then sit or dip, other times it flew a short distance, then kinda belly-flop on the sea. I tried getting TB or NA on their mobiles but no luck, eventually I got Dave Elliott, but by the time he and Andy Cowell got there the terns had dispersed, I was sure the shearwater was still on the sea but we couldn't relocate it. Andy Cowell and I had a dark-phase Pom (no spoons) which appeared to come out of the bay to fly north-east. Just as I was considering packing up (cos I was freezin and the light was going) I picked up a sabine's gull, quite distant, flying north. I knew immediately what it was, as SS would say, you jurst knaaaa! It was a juv/1st winter and was flying with a juv kitti for great comparison, I watched it fly north until it was opposite the County Park - Fantastic! This is my first ever for DP with my only previous Northumberland sightings coming from Newbiggin, including four in one day in September 2005. I plan to desert the patch tomorrow morning for a couple of hours at Newbiggin before work - will I regret it?

Pssst. You know those dark phase poms without tails? We calls them Arctics up here!!!:-)

Nice Sabines though. The 'young' ones are all juvenile. They don't achieve fw plumage until in the wintering grounds off west Africa.

I was expecting grief bout me Sab, not me Pom! Artics don't fly like this beast did! I read your latest post after I had written my bit about me Sabs, your right like - no mistakin them, even at distance!

hey its tara, here is the website i was talking about where i made the extra summer cash.......... the website is here

S'OK, I believe your Pom. Being in a glass house, i don't throw stones. Except at North Sea Great Shearwaters :-)