Had to work this morning, for free mind you as I had already maxed my flexi-time grrrrrr! Had lunch at Stag Rocks, there were thousands of Gannets tonking by and as TB had nothing to report from Holy Island I fled south to newbiggin for an afternoon's seawatching. Good morning passage, including six Sabine's gulls and a handful of grey phals had attracted a crowd. 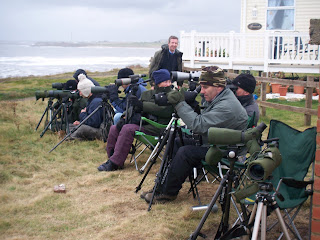 Things were quieter this afternoon but a nice juvenile Sabs close in and very close, if brief, grey phal were very nice. My totals for 1440-1745:

A Brambling on the point was welcome year-tick. I spotted this on the way down to newbiggin, an outstanding animal-print fleece, there is another lady hidden who also had one, bu a yellow version. I had to do a U turn, grab my camera and drive slowly by them to catch this shot. Seemingly for those that are interested, they can be bought at Ashington Market. Stunning!! 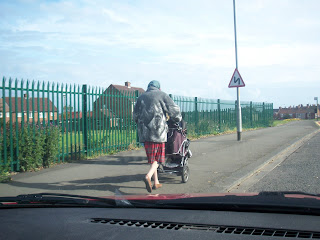 Should be back on the patch tommorrow all being well.

Isn't ''taking images of weird owld women while in charge of a motor vehicle'' illegal in th UK?

Good work though, all the same.