Well I've got to admit, my visit back to the pools (1640-1810)after the Portugal stag weekend was lookin a bit boring. nowt on the sea except 5 red-throats (reports of MORE great shears further south) the budge fields have dried up and there was nothing on the main pool of note. A cracking male kestrel was all of note. There were some people tho (rare for dru) and one couple had spotted an Otter, then another. I got on to them, but failed miserably to photograph them, for about 20 minutes, what I presumed was the Dog, as it was geet big like, was feeding in the water about 30 metres from the hide, tricky to get a shot of these chaps, unless they are on a bank I reckon!

Only other thing of note was single juv ruff, which I managed to photograph (without the scope) just as it flew off. 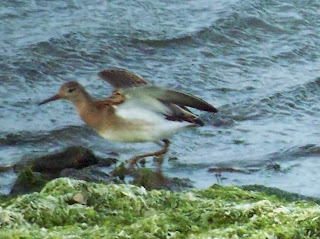