I took the afternoon off work today and headed for the patch. It was a beautiful sunny afternoon but the westerly wind was biting cold.

A couple more migrants were added to the list. Firstly sand martin, six days after the first (and only) swallow, I noted at least three sand martins over the dunes. I also saw a white wagtail on the Budge fields, another first for the year. The white wag was too distant for a photo, but this female pied wagtail wasn't.

A great-spotted woodpecker flushed from the bushes by the little hide was an oddity and presumed coasting migrant? Great-spots are usually an autumn bird at Druridge, being seen from August onwards with occasional influx of 'big fellas' from the continent. A spring record is very rare.

Other things of note included a monster count of gadwall - 25 of them! Most of them were grazing the adjacent pasture like wigeon. There were two pairs of pintail on the Budge fields. There's also been an influx of linnets and reed buntings this week. A few chiffchaffs are singing now but no willow warblers yet.


Highlight of the afternoon though went to a very obliging short-eared owl. There's still one or two hanging around the patch and they're a real treat to watch. I picked this one up in the dunes first.
It caught a big vole and sat on this post for a while before sitting in cover devouring its prize.

It then moved off a short way and sat on this nearby post, right next to the road, presumably digesting the vole, most of which was gulped down in one go. The wrens, robins and blue tits fussing around didn't seem to faze it. 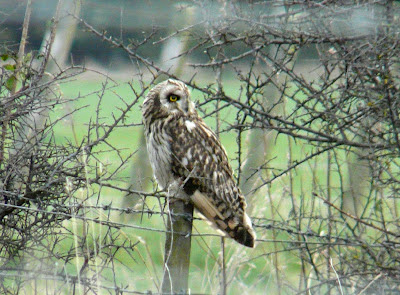