I smashed the 100 mark this morning.

100 species of bird seen on the patch since January 1st, six days later than in 2010. The two new birds this morning were yellow wagtail and greenfinch, not really exciting I know.

I did my territory mapping survey this morning, there has been an influx of willow warblers with at least eight singing males heard. Up to seven chifchaffs were chiff-chaffing and a single gropper was reeling away from the reeds.

Out on the haul-road, the piles of chicken muck attracted eight wheatears, two white wags and a yellow wag as well as numerous meadow pipits, chaffinches and linnets. The retired birders might to worse than to keep an eye on the shit piles, I turned a lapland bunting up there last spring.

It was a lovely sunrise this morning, this was taken from Cresswell. 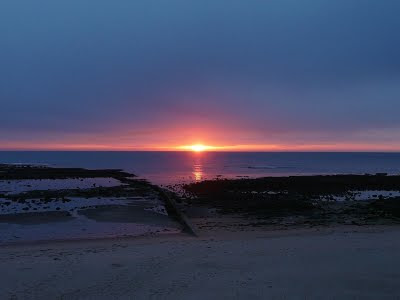 100 already! Takes me till early autumn most years, if I get there at all !!