Saturday 5th January
Yesterday was winter birdrace day, five teams set out to see as many species as they could in a single day within the confines of the County. I like a winter birdrace, they aren't as knackering as the 24h hour may birdrace and because everybody goes out on the same day (except the Stewarts team who went out today - cowards) the craic is good as teams meet up during the day and when everybody meets at the pub to declare their scores.
So our team, 3 blokes and a bird, (The Kitchens, Trev Blake and Me) set out from Ellington, in the rain, at 0630. Now obviously I can't tell you where we went for fear other teams might use or gen, but I can say that we didn't do well.....We only saw 99 species, the first time we haven't broken the 100 mark for a few years. The weather wasn't good, with a bitingly cold SW picking up throughout the day and our timings went a bit wrong so it was nearly dark when we arrived on Druridge Bay. We did see some excellent birds including merlin, peregrine, hooded crow (first one of these in the County for yonks), lap bunting, greenshank, blackwit, glaucous and little gull, kingfisher (the only team to get these cos the rivers were like the chocolate one offuv charlie and the chocolate factory - ours was at a lake at Howick). 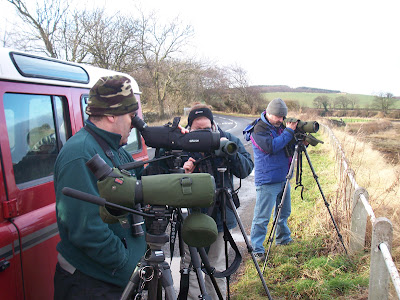 We dipped on some easy stuff though, including reed bunting, yellowhammer, fieldfare, pied wagtail and grey partridge.

The final standings, I think, were:

The duffers (Muriel and Tom, Neil and John) 105

The Stewarts, cass and Crilley are out today taking advantage of longer daylight and much better weather so they might be in with a chance, but it doesn't count so who cares!!

Thanks to Newton Stringer and the Boulmer Birder for good gen, good to see bloggers sticking together!! The day ended even better with a fantastic meal with the opposition (the old duffers team) at Neil and Andrea's - Thanks to them too for great night! 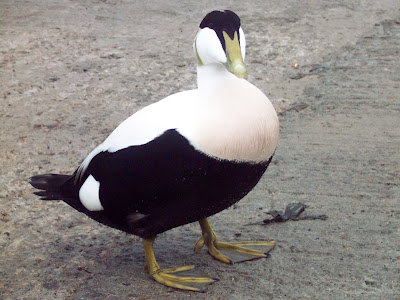 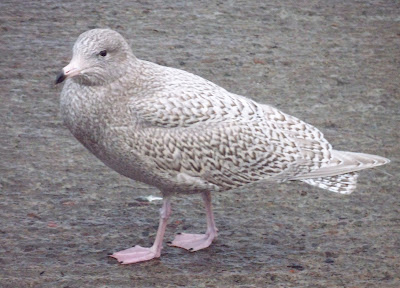 Stunning drake eider and glaucous gull at Seahouses Harbour
Posted by Ipin at 17:10

Harsh...it was tropical on sunday compared to the grim cold and wet of saturday....We still dipped on a few easy birds though - pied wag for gods sake!