After a look around the plantation and bushes by the entrance to Druridge, having seen a chiffchaff, great-spotted woodpecker, goldcrests and Ian Douglas of note, I was chatting to Roger Foster when he said 'I've got a swift'

Any swift in October requires a grilling. Unfortunately this bird was already quite distant and was heading north. It did bank around, three or four times, even looking like it might head south once, but it didn't. I saw it briefly in the scope before we lost it as continued north.

We had nothing better than silhouetted views in very poor light against the sky. At times, when it banked, the wing-tips looked sharp and when it banked again they looked blunter. Pallid swift has to be a possibility at this time of year but we couldn't do anything with it at this distance and in this light. Pallid/common swifts can be tricky in Spain with stunning light against the hills.so this one will go int he notebook as 'Swift sp'

I had an hour on the big dune, scanning the skies - nothing.

Seemingly it, or another swift, was seen again mid-afternoon. I don't know who by.

There was a bit of vizmig today, with groups of skylarks going over, a few pied wags and meadow pipits and a flock of redpolls headed south. A steady stream of herring gulls also headed south. A peregrine put up the gulls and lapwings from the fields - my first of the year unbelievably.

I was back on the patch in the afternoon after three snow buntings were reported on the beach by the turning circle. They'd moved south a bit (thanks for the wave Neil) just beyond the blockhouse.

After been absent from Druridge for a few years, I've connected with snow bunting in the last three winters. 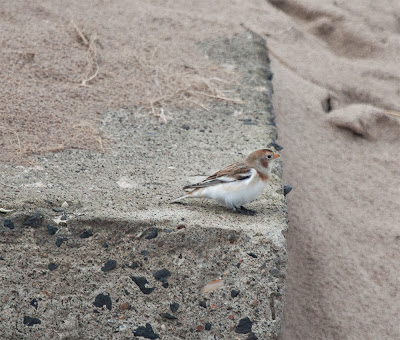 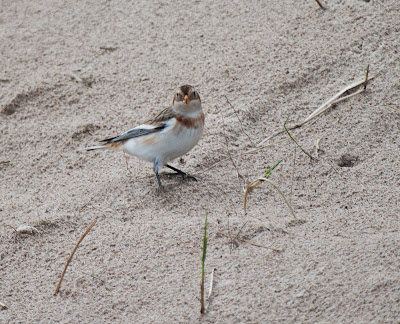