I had a quick pre-work visit to Druridge yesterday morning and spent an hour in the plantation. Highlight was a pied flycatcher, quite late I though, so I gave it a good grilling but it was nothing rare than a pied fly.

There were a three or four chiffchaffs, one very grey bird called like a Sibe, the others were bog standard chiffs. Three swallows flew south, a few goldcrests flitted about and handful of redwings were present.

I took this afternoon off. Today looked like the only day of the week that would be suitable for ringing. I had a good session, catching 24 new birds. A chiffchaff was the only warbler in the nets, also caught eight long-tailed tits (another 12 flew south), three goldcrests and assorted tits, fiches and wrens.

A great-spotted woodpecker passed through the bushes.

Once I had packed the ringing site up, I had a look offshore were the highlight was a drake velvet scoter leading the pack north as it was being followed by 21 common scoters.

It as a fab sunset tonight, took this with my knackered old phone on its last day before I join the 'iphone generation' 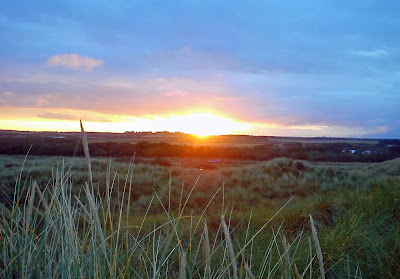