No Druridge today unfortunately, the necessity that is work got in the way again.

I was out and about a bit though, this morning I was in Rothbury and on my drive there and back I saw flocks of thrushes, fieldfare and blackbirds mainly moving about, looking as though they had just arrived.

This afternoon, I had to go out on site in Stewart's patch. Two days of near gale force easterlies have certainly whipped the North Sea into a frenzy, as we drove along the coast road, clods of foam were flying over the car, landing amongst the sheep in the filed next to us.

The sea was boiling and although the wind had eased a bit, was still blowing spray our way - it was quite exhilarating! In the small, stunted hawthorns by the Coast Path, we saw a few newly arrived goldcrests busily feeding and a couple of blackbirds. Goldcrests never cease to amaze me, such tiny creatures making it over the north sea in such horrendous conditions.

The boys from 202 Squadron at RAF Boulmer were using the bad weather to get some flying practice in. 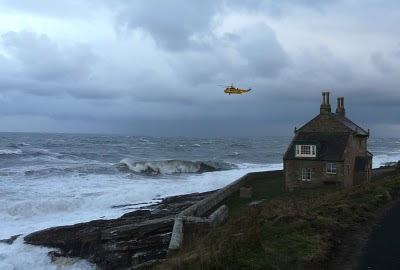 Congratulations !! I think your blog is the only one in Northumberland that isn't full of squacco photos or ramblings about squaccos.

Not quite sure what that actually means ?