There hasn't been a blog update for a while for two reasons; firstly, I've not managed to get down to the patch very much and secondly, there hasn't bee much to report when I have been there. As storm after storm have chased each other across the Atlantic bringing bands of heavy rain and gale force winds it hasn't been conducive to birding.

Recent highlights have included three, sometimes four Eurasian white-fronted geese, which seem to be hanging around with the Canada geese or the feral greylags.

The week before last a drake (American) green-winged teal was reported from the Budge fields, I tried a couple of times to see it but without luck, it may well have been there but Storm Dennis was lashing the reserve and the teal were all cowering behind rushes for shelter. ADMc also found a female Garganey - seemingly only the second winter record for the County!

Last Sunday I was down on the patch for dusk. An impressive arrival of (mainly) common gulls came in from the west and settled on the sea, the tide was well in. By the time I left, I (conservatively) estimated 2500 had gathered on the sea or on the beach.

On Thursday afternoon I went up to Chibburn Mouth to see if the beach is going to be suitable for fencing for terns this year - it has potential. On my way north I counted about 82 twite in the dunes amongst the cattle to the north of the turning circle.

I returned by the beach as the sun dipped behind the dunes. Black-headed gulls and passing red-breasted mergansers entertained me on my way. 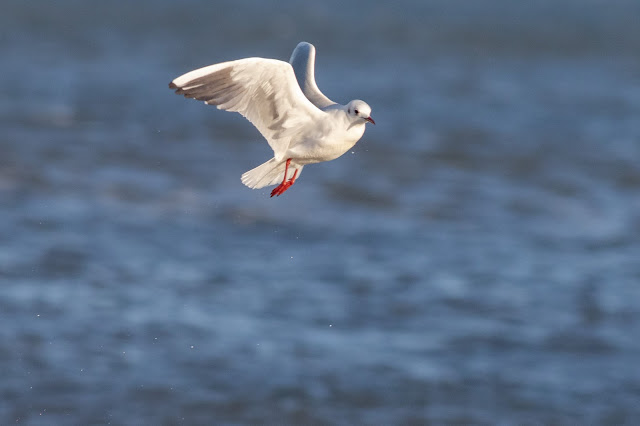 At the mouth of the Dunbar Burn, the water has taken a northerly route, cutting away at the face of the dune and making progress along the beach impossible without wellies or a diversion to the cycleway bridge. I opted to use the concrete blocks as giant stepping stones, which could have been disastrous with a tonne of camera around my neck.

On the 'other side' a passerine was scouring the edge of the water for food - bins on it - a snow bunting! I sat on a bit of concrete and waited for the bird to make it's way along the shore from the shadows into the late evening sunshine and it duly obliged. 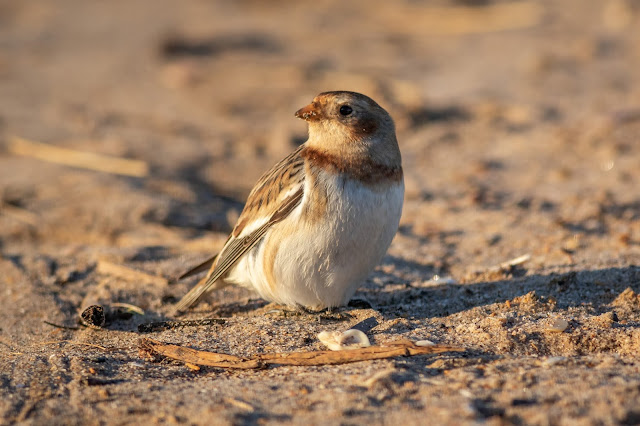 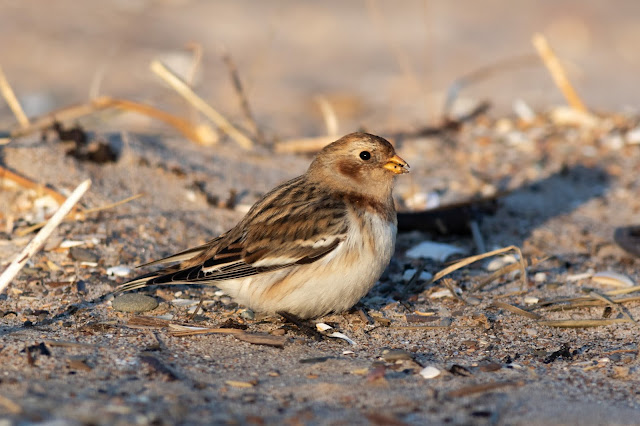 My presence didn't phase the snow bunting and I took dozens of shots and could've taken more but frostbite had set in. Back into the dunes, the sun had dropped as had the temperature, 2 degrees, feeling colder in the stiffening wind. I was freezing after spending half an hour with the snow bunting but the cold didn't deter two brave girls who were in the sea  - in bikinis! Nutters.

Things got stranger as I headed for the Budge fields, with what appeared to be a scantily-clad girl in some kind of glamour shoot... It's a strange place Druridge.

Wing and a Prayer said...