On the back of recentl northerlies I've managed a couple of post-work evening seawatches in the last two days but did I find a crock of gold at the end of the rainbow? 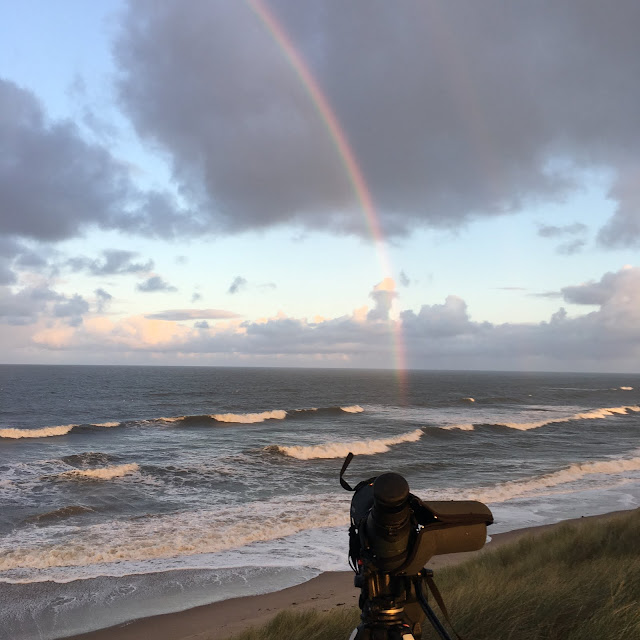 Yesterday evening (17.40 - 18:15) the visibility was better than had been on Sunday evening but the sea was quite quiet. It wasn't a waste of time however, as there was a huge movement of barnacle geese. I counted 307 in different groups - the most impressive was a group of about 85 that I watched coming in-off. Picked up on the horizon, they zig-zagged north and south until they reached land just to the south of me, disappearing behind the dunes.

The other highlight was a purple sandpiper. Being a bird of the rocky shore they are a very rare bird at Druridge, but conditions were perfect - the top of a high tide when they are pushed off Snab Point or Newbiggin and they head north, probably to the safety of  Coquet Island to sit-out the tide. This was my first patch-record of a 'purp' since 2014.

Tonight (17:20-18.40) was much more productive for seabirds. I thought it was going to be when the first bird I got onto was a bonxie, followed by two groups of manx shearwater with three sooty shears for company.

The kittiwakes, lots of them, were quite far out and the lack of gannets suggested they were even further out again. Other birds were a bit closer, especially some of the arctic skuas and bonxies. Other than the odd manx or two the shearwaters dried-up after the initial flurry.

A grey plover flew north - another scarce wader for the patch.

It went a bit quiet after 6pm and a horrible squally shower came through - I hunkered down in the dunes and watched the rainbow until it passed. I had though about heading home, but I'm pleased I didn't. Another heavy shower offshore seemed to push birds in a bit as a couple of bonxies and arctic skuas passed close-by.

Then, from out of nowhere, two steely-grey juvenile long-tailed skuas appeared above the freshly-arrived raft of gulls on the sea. They swooped and towered above the skyline, quite close in, for a few minutes before heading off south down the bay. My first long-tailed skuas on the patch since 2013. It's often the case that long-tailed skuas will venture much closer to shore than their relatives, I've seen this at Druridge before and at Newbiggin where I've seen them fly behind seawatchers, cutting Church point.

The light faded quickly soon after and I headed home, cold and wet, but having struck seawatching gold at the end of the rainbow.