The pace of migration and birding as tailed-off a little bit since last weekend when easterly winds brought some interesting passerines onto the patch.

The highlight for me was a little influx of lesser whitethroats, which are a really scarce bird at Druridge these days. Janet and I found a couple on the Saturday morning before we went to twitch the hoopoe at Amble links.

Post and pre-work visits on Monday and Tuesday brought the maximum count of lesser-whitethroats to four, including a very pale looking individual which I only saw for seconds before flitted off. On Monday two of the lesser-throats were joined by at least five chiffchaffs one of which one looked and called like a Sibe chiff  tristis.

I added some other Autumn goodies to my list including yellow-browed warbler, bullfinch, greenfinch, siskin, lesser redpoll, brambling, redwing, grey wagtail and fieldfare. A late flurry of swallows and house martins headed south over the same days and there was good passage of skylarks.

The wind turned westerly for the latter part of the week and a work trip meant it was it was Saturday morning before I got back to the patch.

I paused by the 'front field' at Druridge Farm as there were some pink-footed geese, about 300, feeding, but mostly sleeping, there. I scanned them all, but noting unusual stood out, other than couple of neck-collared birds which I couldn't get the full code from. They got up and flew around when a small came over.

Whilst I was scanning geese, a flock of 31 whooper swans flew south and along with the two in the adjacent rape field, were my first of the autumn. I managed to get some photos as they flew over. 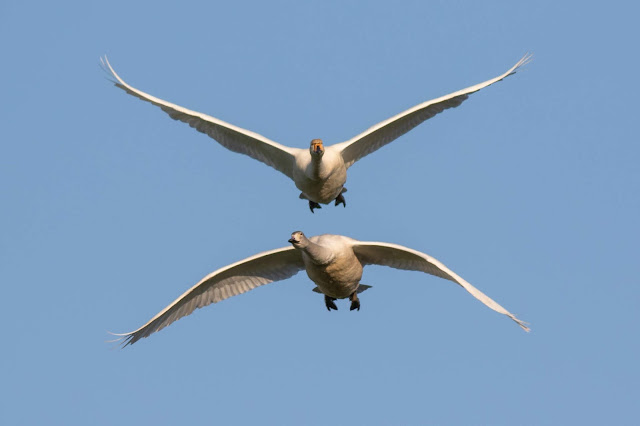 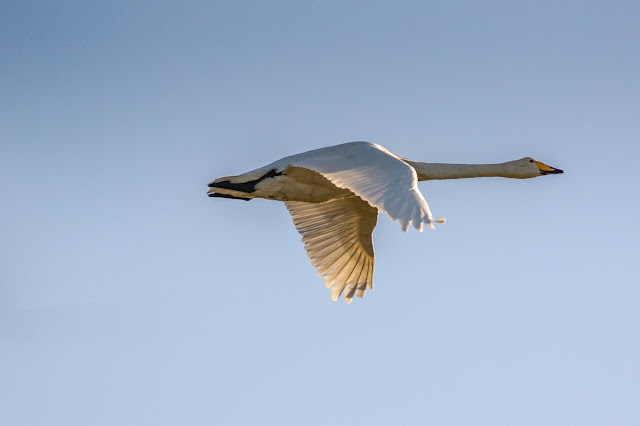 Overhead, a near constant stream of common gulls flew west from the sea to agricultural fields - they return each evening at dusk to either roost on the sea or the beach depending on the state of the tide.

No scarce passerines were found, just a chiffchaff or two travelling with the long-tailed tit flock.
On the Budge fields there was another flock of 18 whooper swans - 15 adults and three juveniles.

Today started overcast and grey. Janet and I headed down to the patch for just after first light. It felt quite quiet with few passerines moving other than a roving tit flock.

From the plantation, I spotted a large bird flying strongly south just above the dunes - it was an adult ruddy shelduck. I've seen ruddy shelduck on the patch on the patch before but many years ago. I'm not sure where this species stands on the official British list now, I must check...

There were a few cars parked together near the blockhouse which was unusual, by the time we reached the cars there was a group of a dozen or so folk standing around them. As we approached one of them said;

They asked us join them next month or on 21st December - we politely declined and wandered on.

It rained heavily just before 9am which was quite handy as we had an appointment with friends and a large breakfast at the Drift Cafe.

I'd completely forgotten it was WeBS day. The rain had eased a little after 5pm so I went back and did my WeBS count -it was pretty grey and miserable and the rain became heavier. The highlights were a little egret and a kingfisher, my second of the year, over the big pool.

My year-list now stands at 156. A few species are still feasible but it ain't gonna be a record-breaker.