It's a record breaker!

2016 has been a record-breaking year on the patch - I have seen more species on  the patch in 2016 than any previous year.

I am not sure what has made this year so special as despite the very good autumn for passerines, I didn't see many unusual species for autumn - firecrest being an exception. It has been a good year for waders with broad-billed sandpiper new for the patch and good year birds like jack snipe and pectoral sandpiper - grey plover and Temminck's stint where the only real 'missers'.

I missed a few regulars though - spoonbill (recorded annually since 2010), pomarine skua (one miss since 2009), garden warbler and bullfinch. I suppose there is still time for a little auk, purple sand, long-tailed duck, rock pipit or even a white-winged duck to further boost the tally.

Last Sunday was my first day back on the patch after a nine-day trip to Fuerteventura. I was watching these on the saturday morning.

It was really nice to see a hen harrier back on the patch. I was loathed to mention it's presence on here, but as they are all over social media there is nothing to lose. The photos show this to be a juvenile - the dark secondaries on the underwing being a tell-tale sign. 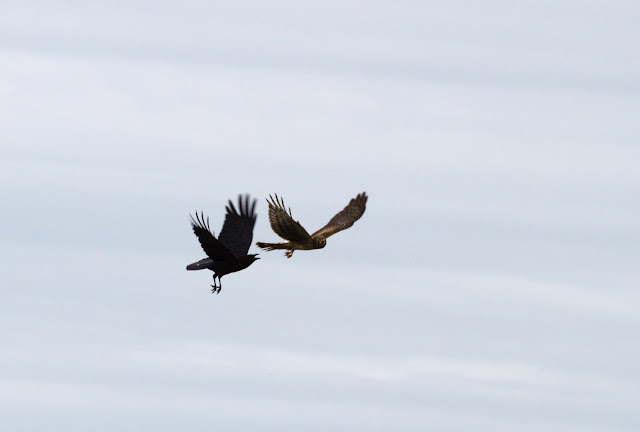 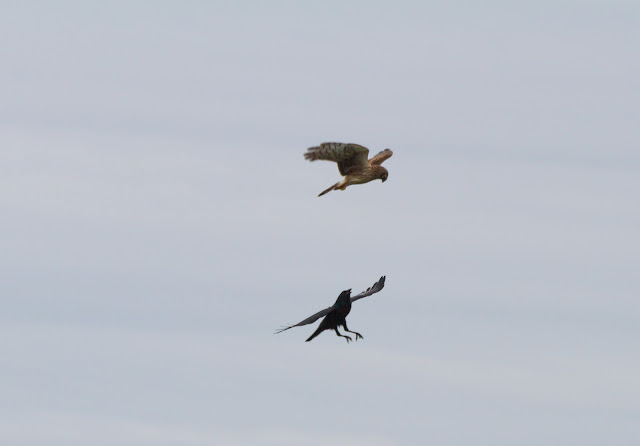 I did the WeBS count on Sunday too. There were a lot more wigeon and teal than when I left for Fuerteventura and the snipe numbers had increased to 18 (at least - although a passing hen harrier helps to get an accurate count). Three little egret and 18 black-tailed godwit gave the count a hint of summer. There were three nice red-breasted mergansers on five goldeneye on the big pool.

There has also been an obvious recent influx of blackbirds as there were many of them feeding up on hawthorn berries. Two greenfinches (a scarce species at Druridge) in the willows by the entrance were the first of the autumn and there were still plenty of robins about.

Today, a hen harrier passed through briefly and a female sparrowhawk was causing havoc on the Budge fields. I had a walk through the bushes, there were still plenty of blackbirds on the berries. This fella was watching me, watching him, through the fence.

At the top end, I inadvertently flushed a roosting long-eared owl. It flew from it's perch, straight at me - it's bright orange eyes looking straight at me, before it back-flipped and flew off north. I wonder if it is a recent arrival?