The farmers from High Chibburn were getting the silage in today, making the most of it before the rain set in this evening no doubt. When I was a nipper, I used to enjoy silage time, spending hours in my mate's dad's tractor leading the freshly cut grass back to the silage clamp - great fun! 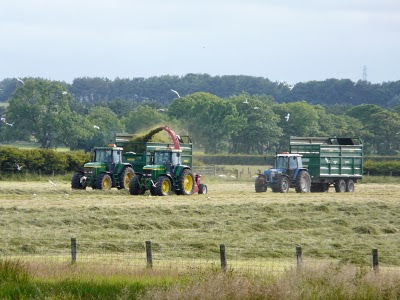 There were about 70 curlew in amongst the rows of cut grass before the tractors turned up, they'll be back tomorrow along with lots of gulls, corvids and hopefully other waders.

One thing is for sure, they're won't be any waders on the Budge fields and if there are, you won't see 'em! It is like the plains of the Serengeti again - herds of wildebeest could be lurking in there... Back in May I told NWT that cows were needed quickly at Druridge, to benefit any juvenile lapwings at the time, the lapwings have gone or more likely been predated.  I've asked them since...still no cows.

I was so optimistic over the winter and early spring, the grazing was working and the site was looking in reasonable fettle for the first time in years. Now I am falling back into a state of despair, I should've known it wouldn't last. They can't even send someone out with a strimmer to cut the grass on the paths and in front of the hides, what hope of a sensible grazing regime?

The whole site has a feeling of neglect.....

On a brighter note, two adult common terns feeding a large young kept me amused for a while

As did this black-headed gull

I remember not long ago that Highland cattle were grazing and a fair amount of muddy areas with numerous waders. In amongst them a Wood Sandpiper .........when will you get the next one??
John

As you well know Iain, grazing is often crucial on these wet grassland sites.... If management for wading birds is the key objective on this field then I am very surprised that the wildlife trust have not considered the importance of sward condition ?

Re- silage, I really hate the stuff, it’s evil !! Species poor, and definitely bad for ground nesting birds. I saw a corn bunting last week flying into a silage crop that was in the middle of getting cut, very depressing.....

I can only agree with your silage opinion Stringer. I dont know if you follow my blog, but the Skylarks on my patch get wiped out every year )-:

Used to do the same only it was hay back then - could almost smell the scent of cut grass oozing out of the puter when looking at your pic of the tractors. Btw they's fancy ones with cabs n all!!!

Stringer..The Budge fileds are supposed to be managed for breeding lowland waders and wintering dabbling ducks and waders, grazing, or lack of, is the problem. The silage filed next door is quite low-intensity, they only take one late crop so young should be well fledged, I had a family of 8 grey partridge in it only 3 weeks ago.

At least three of this year's Lapwing chicks around the main pool were taken by crows. Not pleasant to watch...

Aye Martin, predation is a problem, if the habitat is good (ie very short sward when the chicks are young) they stand a better chance. I would also like to see more regular coppicing to reduce crow/magpie nesting habo, hut ultimately some predator control would be the answer.....