We were ringing at Dru this morning and only went and caught a PATCH TICK! nothing rare (except at Dru like) but a patch tick nonetheless.......Treecreeper! Bit of a tart's tick I know, they are bound to move through every autumn/winter with roving tit flocks etc, but I've no seen one so I'm chuffed! That'll be 217 in my tiny little patch. 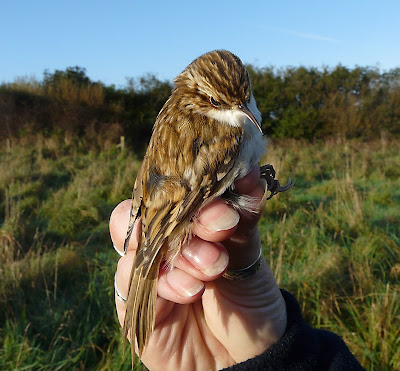 It was a good mornings ringing, we caught 44 new birds, 13 different species, 3 retraps and a control. The control was great tit, it was an adult but had been ringed as a pullus, probably from a nestbox, we know this because it had been ringed with a 'B' size ring, which are only used on great tits when they are pullus, A's are used on fledged birds. So we will have to wait to see where it has come from.. 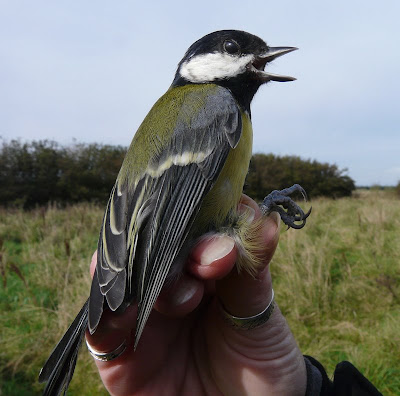 There was a flock of 13 long-tailed tits moving through, we manages to catch nine of them, they are very funny birds, the four we didn't catch 'hung-around' in the trees next to the car while we ringed their mates, calling to the birds in the bird-bags - which were calling back, very sociable birds lotti's. We also caught 5 greenfinches which is quite unusual for Dru, they must be on the move. 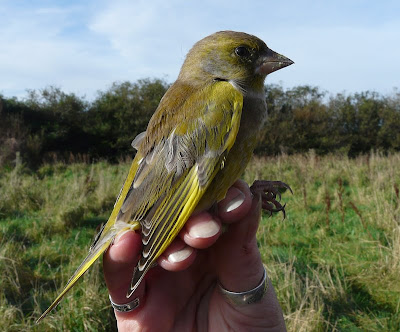 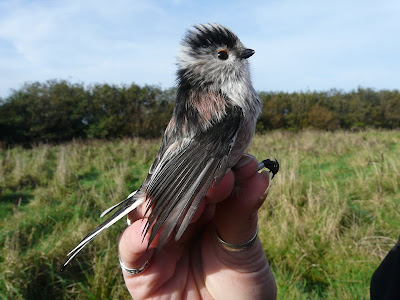 Also on the move were skylarks, moving south early on, we heard at least 12 going over and some geese, 3 skeins of 60-70 pink-foots south and 47 greylag north and a grey wag and 5 swallows going south together....

Offshore there 26 divers in the bay - all of them red-throats in a wide range of plumage's, a great-crested grebe was among them.