Red Kite has been my most anticipated patch tick for about four years and today I finally nailed one.

I was looking west from the dunes this morning after my WeBS count when I spotted a long-winged raptor over the shelterbelt by the haul road. I put the scope straight on it and there it was, a red kite sauntering along the top of the pine trees (what's left of them). I watched it for a while as it went it back and forth. A stunning bird.

Red Kite has been on the official Druridge patch list since 2016 but it's taken me another six years to catch up with one. There have been many more records from this part of Northumberland in recent months so it was only a matter of time.
Red kite takes my patch list to 254 species.
The belated WeBS count this morning was quiet (we were away on the Solway Coast at the weekend). A handful of dunlin and snipe and three black-tailed godwit were all of note. The Budge fields look good but East Chevington seems to be attracting all of the waders at the moment.
Today was hot, it probably touched 30 degrees this afternoon and it was still humid and warm this evening. I headed to the patch for an evening seawatch. A flock of 700 scoters were close in, I scanned them several times but could only find commons scoters. About 24 manx shearwaters flew north in several groups and two red-throated divers and two great-crested grebes were still in summer plumage. There were a few terns feeding including up to seven roseate, which is good given the Avian Influenza tragedy unfolding on Coquet Island.
A beautiful sunset drew close on the hottest day of they year (so far...). I started the day with a red kite and ended it with a red sky. 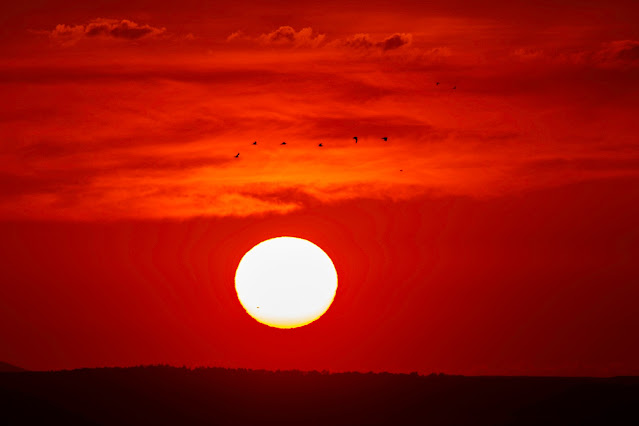 This my first blog post for ages. I'm struggling to find the time to keep with things and the blog has slipped. I've got some new hoverflies for the patch to report, I just need a wet evening to write another post.