Apologies for the lack of posts recently, it's not that I've not been to the patch, I've been most days, there just hasn't been much to write about.

December is usually a bit spartan but this December seems more so. It's hardly been light enough to bother taking the camera out - sunny days have been few and far between, just day after day of grey and rain.

The wind was out of the north for much of yesterday and strengthened into the evening - strong enough to bring some Little Auks down? - only one way to find out. When I got up this morning it was sleeting hard and just looked miserable, but a check of 'Rain Alarm' suggested a brief window of dry weather from 11ish, which happened to coincide with high tide.

The sleet promptly cleared away at 10:50 and I was set up for a seawatch. The sea was big and the wind still out of the north but it felt quiet - quiet enough to count gulls and auks - mostly unidentifiable dots on the edge of the world but a few came close and the sun had come out providing a really nice light.

About 15 minutes in I picked up a small pale-grey bird, almost looking white in the sunshine, heading north just beyond the breakers, it was disappearing into the troughs but as it drew level I got some good views - it was a Grey Phalarope. This is the third Grey Phalarope I've seen on the patch - and I've always thought how pot-bellied they look, side-on, like a little dove or pigeon - they're a compact little thing too. Virtually white below, with darker-grey upperparts and a really obvious white wing bar on the upper wing. The dark 'eye-mask' stood out in the strong light, I didn't really notice the bill - it must've had one!

It kept going north along the bay, hugging the line just beyond the breakers. I notice that Jonathon Farooqi had one much earlier at Church Point so it's unlikely this was the same bird, unless it stopped-off to feed en route?

Seawatching continued to be quiet in terms of numbers but plenty of variety. I had a skua species heading south, again on the edge of the known world - it was just a shape really, towering constantly as it went south. I thought Pom but more likely a Bonxie as the Newbiggin lads had a few south and Bonxies are usually distant birds at Druridge. Other highlights included both Great Northern and Black-throated Divers and a drake Velvet Scoter with a smattering of Red-throated Divers, Gannets, Kittiwakes etc

I continued until 12:20 when a heavy sleet shower arrived. No Little Auks but the Grey Phal more than made-up for that. Full list here.

Last weekend was a bit frustrating. We'd bumped into Janet's parents just as we were leaving Druridge - they headed off north for a walk. Later in the afternoon, Janet's Dad messaged to say he had seen a male Hawfinch on the fence along the Bridleway north of the turning circle. We spent an hour-and-a-half looking but no joy - it could've been anywhere. Alan knows his birds so little chance of mis-ID. Another patch-tick missed this year. I'll have to insist that he takes his mobile with him when he's on my patch!

Otherwise not much to report - the Water Pipits (up to three) are still on the Budge fields but are difficult to spot, up to two Chiffchaffs are sticking it out but this cold snap might move them on and three Scaup have regularly been seen on the big pool. A few Bullfinches are also hanging about - not a common over-winterer at Druridge.

Here's some photos I've taken since my last post. Happy Christmas everyone. 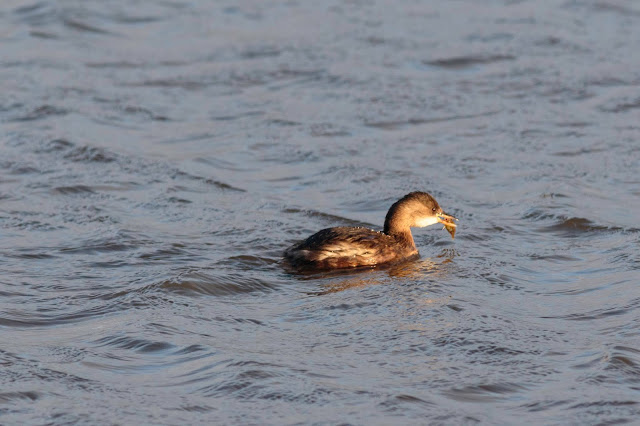 Lovely stuff. Always enjoy your blog. Studied at Newcastle 40 years ago so some affinity with the area. Some great bird shots but as a general naturalist enjoy all the invert & plant shots too when in season. Have a great Xmas & look forward to your posts in 2020 when hopefully we'll eventually be removed from the shackles of the pandemic.

Thanks - it’s nice to know that someone reads it! All the best!