In stark contrast to the cold and snow of last weekend it was quite pleasant out and about this morning, mind it was a bit blowy yesterday.

Yesterday we braved the winds later in the afternoon and walked up through the dunes and back along the beach. In the dunes we flushed up a covey of 12 grey partridges, my first of the year here and since the cattle returned. There were up to 2000 pink-footed geese on the fields beyond the haul road - some of them got up and flew over the dunes.

Despite being sandblasted, we had fun watching the sanderling being blown sideways along the beach, they were feeding in the sunshine were it came through a gap in the dunes - the same gap the wind came through. A small flock of eight curlew flew over from the sea. 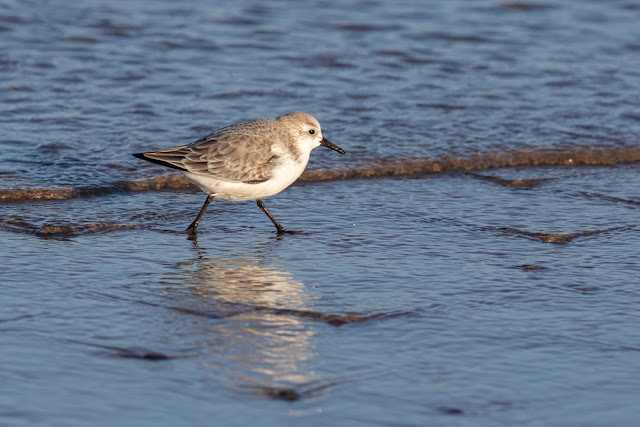 Today we headed inland, first to the Oddie hide were there was little to be seen other than a huge flock of noisy Canada geese.
We continued towards the preceptory where we saw a single yellowhammer on the hedge (there are over 50 in a cover crop only two-fields away). Yellowhammers are hard to come-by these days and are a species that i didn't see last year on the patch. On towards the haul road our souls were lifted by the first singing skylarks of the spring, obviously enjoying the sunshine. There were at least six in the fields either side of the road.  Beyond these fields at least 30 whooper swan and handful of mute swans were grazing, it was impossible to get an accurate count though as some were in a hollow.

I ventured off the patch (I know, it's not like me and I thought I was going to have a nosebleed) for a wander to Chibburn mouth to check the beach levels where we put the fence up for shorebirds in the summer. I didn't hang about though and headed back down the beach and back onto the patch.