Today has been mostly wet.

Once the rain eased after lunch, I popped down to the patch to do the monthly WeBS count. Nothing startling on the count, six black-tailed godwits, 20 dunlin dropped in and there were three snipe on the Budge fields.

On the big pool it was nice to see the great-crested grebe with its youngster, still sporting some stripes looking less like a humbug, there were also two pochard. Moorhen seem to have had a good year, there were 26 on the patch today.

I had been talking to a couple of visiting birders up here on holiday from Warwickshire, as I was about to leave the hide, the lady says "Is this a bird in the tree or just a branch sticking out? I got it in the bins, then the scope  - it was a bird. It was stunning juvenile cuckoo sitting out on some branches. I am presuming it was locally reared but could've been a passage bird I suppose.

I managed a quick look on the sea before the fret rolled in - three red-throated divers, about 80 common scoter and four roseate terns were the highlights. An amazing sight though, was flocks of cormorants heading north. I counted 54 in ten minutes or so, with one group numbering 24 birds. Where have they all come from?

There were a few warblers flitting through the bushes, mostly willow warblers with chiffchaffs, blackcaps and sedge.

No photos today because of the poor light and rain so here are some macro shots from last weekend. 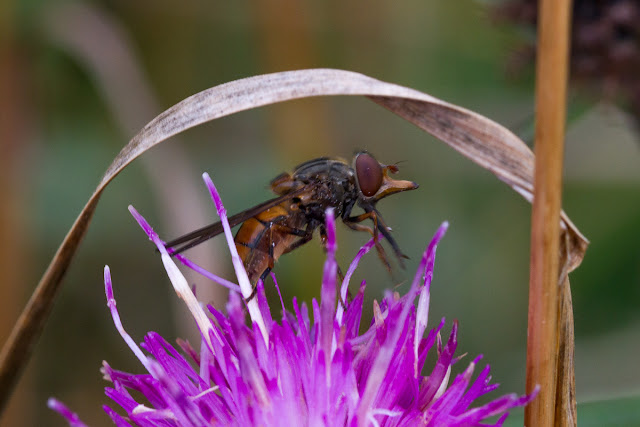 These Scaeva pyrastri hoverflies seem to be quite common at the moment.