I thought about calling in to the patch this morning on my way to work, but I decided against it and went straight to the office. I'm at my desk and check my phone to find a message 'Bee-eater, Druridge Pools, 0820-0920 per RBA'

Then another message 'Bee-eater still at Druridge'

Bugger it! I've got plenty of flexi-time in the bank and I've got evening meetings until 8.30pm, my seat was still spinning as I headed down the stairs. Despite being held up by old duffers doing 30mph I got to Druridge in good time, but had just missed a fly-by by a few minutes...Would that be it?

A good crowd was gathered on the path to the hides where the bird was last seen - the tension was unbelievable! Then ADMc appeared with news that the bird was heading our way. Peering over the top of the bund, distant views were had of a bee-eater hawking over the fields beyond the big pool, until it disappeared towards the bushes by the turning circle.

Alan Jack and I decided to head that way and this is what greeted us in the single ash tree by the turning circle...

A good crowd had gathered to watch it, it sat for ages in the top of the ash tree before flying off and hawking for insects over the dunes, picking prey off the tops of bushes before landing out of site and I had to reluctantly leave it and head back to work.  It is a juvenile, told from the pale colour of the mantle and the amount of chestnut brown in the wing being limited.Surely this is one of the 'Chevington two' from the weekend? 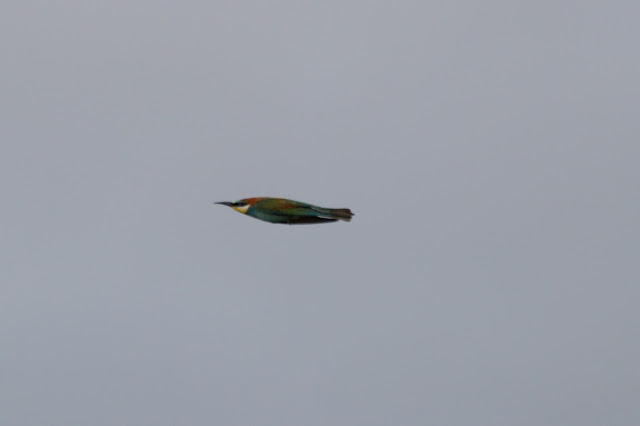 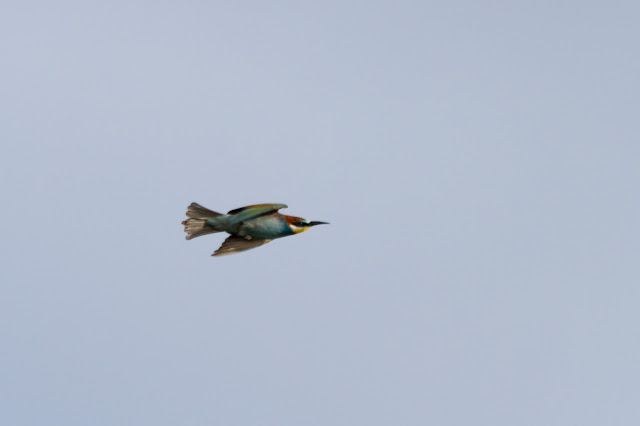 What an amazing bird, a first for the patch and a first for me in Northumberland. I've seen the breeding birds in the UK and thousands in Europe, I've even ringed them in Malta, but this is still probably the best bird I've seen on the patch.

And what an amazing year I'm having on the patch. With no more effort than usual, I've seen eight new species this year already - it is tricky to see two or three new species a year usually.

Brilliant Iain, what a bird for Druridge!

Cheers Stew, it was fantastic!