The wind has been out of the east for the last five days or so, and it is really coming from the east with an airflow coming from from Siberia and beyond.

And so it was, White's thrush on Holy Island on Wednesday and a supporting cast of several Pallas's warblers, red-breasted flycatchers  and little buntings and lots of yellow-browed warblers and that was just in Northumberland. Not so much excitement on the patch. There have been at least two yellow-browed warblers in the bushes by the entrance from Sunday.

The start of the week was quite summery, on Sunday speckled wood butterflies were obvious in the rides with 20 noted, common darters and migrant hawkers, including this pair, were still evident. 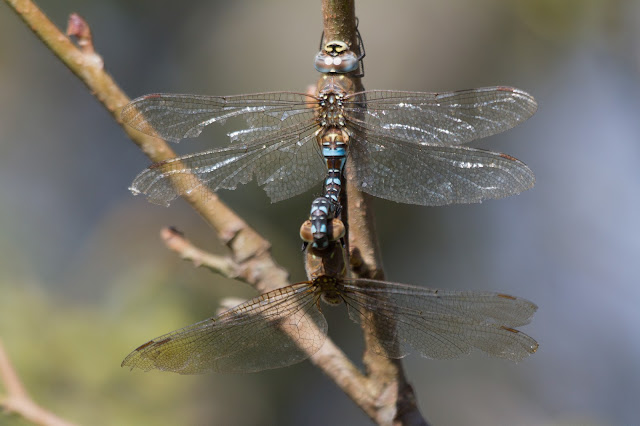 The wind did come out of the north and a seawatch produced three sooty shearwaters and a summer-plumaged great northern diver headed north.

On Thursday morning, thrush passage was evident with mistle thrushes and a few fieldfare passing over, song thrushes, redwings and blackbirds in the bushes. A group of ten swallow passed south - could be the last?

On Friday and Saturday mornings we put some nets up. We caught about 70 birds on each session. Goldcrests were the most abundant species with 18 on Friday and 26 on Saturday - we also caught a lot of robins and a handful of song thrushes, redwings, chiffchaffs, wrens, dunnocks and blackcaps. Lesser redpoll and siskins were newly arrived on the patch and a couple of great-spotted woodpeckers were new-in.

Bright and breezy conditions were forecasted for this morning so a more leisurely start was in order. A wander through the bushes from 11am this morning - there had obviously been a clear out with goldcrests being particularly less obvious. A yellow-browed warbler was very vocal in the willows by the entrance and a few redwing sprung out as I passed by and blackcaps were gorging on elderberries.

As I loitered by the middle bushes, I heard a rustling in the grass and a stoat popped it's head up, I managed a to grab a photos...

There were a few waders on the budge fields and I thought I must return with my scope and then a message arrived on my phone 'red-flanked bluetail at Amble Yacht Club'. I was hungry so a drive by the pasty shop and onto Amble but there was no sign of the bird so back to Druridge.

Bob Gadjus was in the Budge screen when I arrived, and had picked up a distant owl. It flew south then closer, I got onto it in the scope and at first I thought it was long-eared but on reflection it was probably a short-eared owl - it never got close. A second Asio owl was much closer, over the bushes by the path to the Oddie hide and was definitely a long-eared owl.

I scanned through the waders and came across a group of dunlin, there was a bird amongst them that was different - about 1/4 bigger than the dunlin with a no markings on the flanks or belly, the streaking on the breast ending abruptly against the white lowerparts. Pectoral sandpiper - my first on the patch since 2007. Seemingly there has been a 'pec' at Chev for much of the week so I am guessing this is the same bird - nonetheless a welcome year-tick.

The easterly airflow is set to continue until at least next Monday. I will be grilling the patch for my first Pallas's warbler, little bunting or maybe...even... a Siberian Accentor....