The weather forecast predicted light winds this morning, but it didn't mention thick fog, which Druridge Bay was cloaked in for most of the day.

Luckily,  it was the 'dry' type of fog, not a wetting fog which makes ringing impossible as the nets and therefore the birds, get wet.

So, dry fog and no wind, meant good ringing conditions.

As I was putting the last of the three nets up that we were going to sue, I flushed a long-eared owl for the nearby bushes, it flew off, silently...

Our first net-round only yielded a couple of birds, both retraps, until we checked the last net. The long-eared owl had obviously returned to its roosting spot and was now in the net, quickly extracted, we returned to the car to ring it. 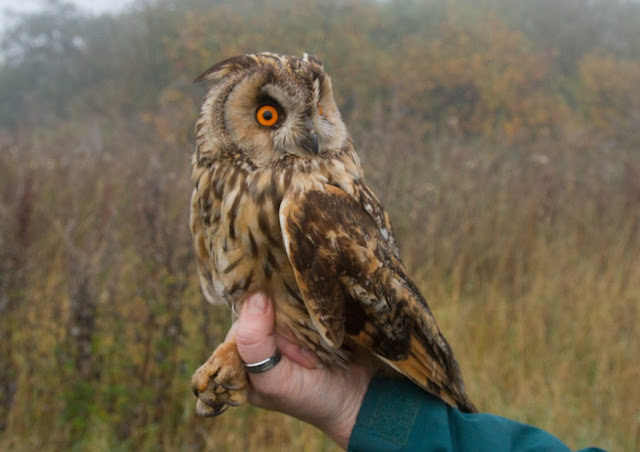 Long-eared owls can be sexed quite easily, this was a female, told by having less white about the face and the 'ground' colour of the underparts being more buff than white. This bird was in active moult, growing a new fourth primary feather on both wings, making it at least a 2nd calender year bird.

This is the third long-eared owl we have caught over the years at Druridge, the last one was last year, a breeding female, which was sadly found dead by a member of the public only 12 days later.

After the excitement of the long-eared owl, we continued to catch steadily throughout the morning until the fog lifted and wind picked up in the early afternoon.

It was obvious that the last two dry and sunny days had encouraged the migrants that had arrived on Tuesday and Wednesday, particularly the thrushes, to move on. We caught 40 birds in total, the only warblers were blackcaps of which there four, three juveniles and a retrapped resident female that we ringed with a brood-patch in August.

Three goldcrests and a song thrush were 'passage' birds. We also caught 12 of the huge goldfinch flock that is hanging around Druridge, making the most of the bumper thistle crop, there are a few lesser redpolls in the finch flock and we caught two of them.

Whilst putting up the nets first-thing, a yellow-browed warbler was calling but was not relocated and later a couple of great-spotted woodpeckers put in an appearance by the car.

Throughout the morning, at least until 11am, there was a virtually constant sound of pink-footed geese flying over. Mostly, they appeared to be going south, but we couldn't see them for the fog, some of the groups sounded quite numerous.

Look out for a Harris'hawk today.

Someone lost one by the Widdrington Inn (it sat in a tree behind the pub for well over an hour) and it flew off towards the coast with owners in pursuit.