The wind moved into the South-east this afternoon and increased in strength to force 3-4. It was high-tide when I arrived at Druridge this evening and they are quite big tides with the full moon, which meant that the gulls would be close tot he dunes, so I decided on a bit of gull photography.

99% of the birds passing close were going south and 99% of them were black-headed gulls. I took lots of shots, most of which I have binned. 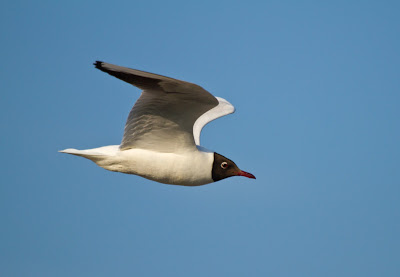 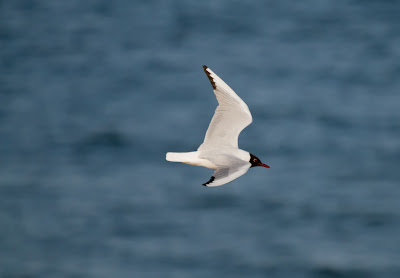 I picked up on Mediterranean gull, a first-summer headed south.

Big gulls were few and far between, I managed a shot of this first-summer great black-backed, though I willing to be corrected on this one... more practice needed.

Hi Iain
JUst back from Druridge Pools. A Marsh Warbler was singing at the road entrance in the clump of bushes on the left as you go in. First heard at 10 am, then showed briefly at about 10.30.

Hi Paul, I saw a birder staring into those bushes this morning, must have been you. I was on the big dune. I'll check it out later. Cheers

Ah I see I was wrong. Sorry to send you duff information. I dscounted the fact that an acrochephalus in that habitat sounding Reed warblerish and with other mimicry would actually be ... a Reed Warbler! I'll try not to make that mistake again.