My decision to take a day off work after a look a the weather forecast paid off today. No patch-ticks, but a yellow-browed warbler and a big fall of thrushes were well worth the effort.

I was down on the patch at 7.30am, it was still quite gloomy, small groups of redwings were coming in off the sea and there were lots of blackbirds in the bushes. In the pine plantation by the entrance, sixty blackbirds were pushed through from the dunes, by a dog-walker with a now-empty dog.

Small groups of thrushes continued to come in off the sea for a couple of hours, before easing off by 9ish. Many of the redwings seemed to keep going, the majority of birds in the bushes were blackbirds. There were a few song thrushes and three fieldfare in the bushes and a single mistle thrush at High Chibburn Farm.

Highlight of the day though was yellow-browed warbler. I was just about to give up for the day, deciding to check the bushes by the Budge Screen on my way out and I am glad I did. A stripy eastern gem was flitting about the willows, calling as it went about with some goldcrests. I lost it for a while after it had a stand-off with a robin. It came back, but never close enough for a photo so I had to make do with these long-tailed tits. 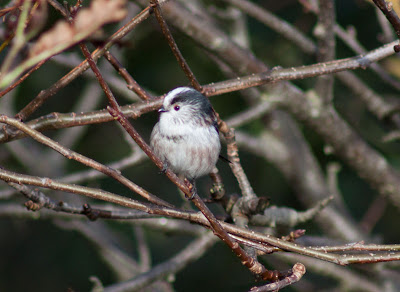 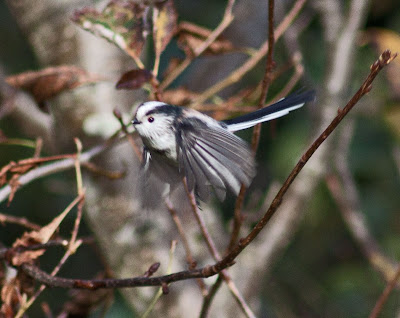 Other highlights were a whinchat and three chiffchaffs amongst the regular finches and tits.

This was my first yellow-brow since the autumn of 2009 and only the second in the last five years...nice!