I was on the patch early yesterday (Monday) evening. Conditions were not conducive to birding, the wind was very strong and blustery from the east then north east and it was showery. Nevertheless I checked some of the more sheltered areas of the patch, around the budge screen, on the west side of the shelterbelt and the track to the hides.

It was obvious that no significant arrival of birds had taken place. Even with the fact that most birds would be cowering in cover, there wasn't much about, a few goldcrests, chiffchaffs, chaffinches and tits.

I fired off some crap record shots, in my panic, forgetting to zoom in, so these are very cropped. 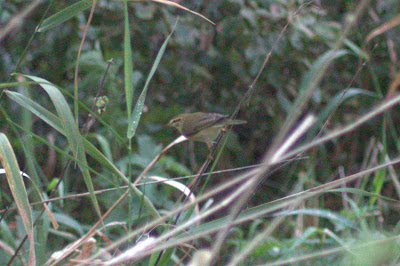 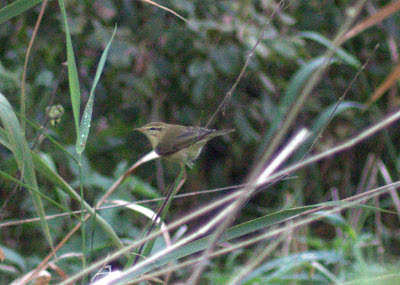 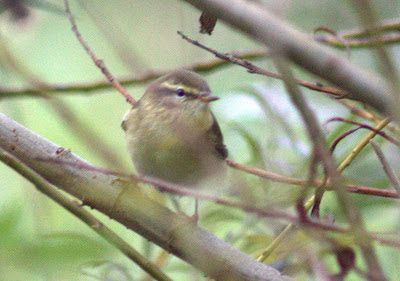 The strong supercillium was obvious as was the dark eye-stripe, the legs appeared to be pink-orange, the bill was horn coloured above, pink-orange on the lower mandible and appeared shorter and stubbier than chiffchaff bill. It was generally yellow below and a darker olive green above. There was contrast between the olivey-green mantle and darker wings, the flight feathers were darker but appeared to have pale fringes. It never called.

Viewing conditions were awful and to be honest I wasn't sure what I was looking at, but it was interesting.....My initial thoughts, given the strong supercillium were of dusky or Radde's, but I thought it was too early for them, wasn't it? I had ruled out Dusky and was thinking Radde's, but this bird didn't have the ochre-orange undertail that the bird we caught a couple of years ago had.

I met up with Dave Elliott and we went back to look for the bird with no luck. When I got home and looked at the photo's I was more confused and after a chat with Stewart had ruled out Radde's and dusky. So a couple of shots were emailed to some birders who know a lot more than me about such things.

The consensus appears to be that it is a willow warbler, probably of one of the eastern races, acredula or yakutensis. It certainly isn't one of the cold-grey acredula forms or 'Eversmann's willow warbler'....

In doing some research I looked for other potential eastern phyllosc's that could occur here as vagrants. Tickell's leaf warbler Phylloscopus affinis kept leaping out at me as being very similar, in many ways, to my warbler  - although it didn't look quite right either, my mind wandered into the realms of fantasy....P. affinis has a similar range (both breeding and wintering) to Hume's leaf warbler, so if one was ever to turn up in the western palearctic, you would expect it would in November.

Unless we catch the bird at the weekend, we will never know what it is and then it wouldn't be straight forward...

It's all been an interesting exercise and I know a lot more about 'eastern' willow warblers and Tickell's leaf warblers that I did before.

It's still raining outside. Druridge was virtually cut-off at lunchtime today, the road to Cresswell was flooded and the road to Widdrington was just passable. I am going to try to get to the patch tomorrow morning before work if I can, to hopefully see and more importantly hear this bird again. There may well be some other migrants to see too.
Posted by Ipin at 23:02

Now that looks exactly the bird i saw a few weeks back on my patch! I had very short glimpses of it, and it gave a tchak call, I put it down to being a well marked willow warbler in the end, but I was never that convinced !