Bank Holiday weekend started early for me as I took Friday off work. We ringed at Lynemouth Sewage Works in the morning catching about 30 new birds. The most numerous species was chiffchaff, none of the birds we were catching were carrying much fat so probably all short-hop coasting birds rather then incoming migrants. In the afternoon, I headed to Druridge to do some serious net-ride maintenance - by the time I'd done three rides I was nettled, scratched and sweating like a twitcher on the way to a mugimaki flycatcher, so I headed off to do some birding.


The highlight was a cuckoo, a juvenile, still lingering in the dunes. A group of five red-throated divers were very close to the beach, on the waters edge, but by the time I had gone back for the camera, they had gone so I had to make do with some sanderlings. 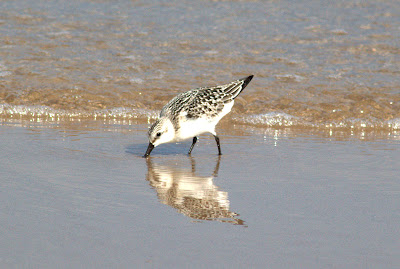 This digital SLR business is going to cost me more than I thought. I've been told by those in the know, that I need to be taking RAW shots rather than jpegs, my poor old computer can't cope with them (in fact it struggles with Itunes) so it looks like I'll have to shell out for a new PC...and then I'll need some software to open RAW files... another £100! I still don't really know what I am doing with it, I might have to harass Alan Gilbertson in Tarifa next week to give me some tips.

I was up early on Saturday (early for me) for a kick around the bushes. There hadn't been a fall of any sorts but there were a few migrants in the bushes including 6 whitethroats, a handful of willow warblers and chiffchaffs and couple of blackcaps. A small influx of blackbirds seemed to have occurred and there was a strong southerly movement of swallows all morning.

I had a look offshore later in the morning but there wasn't much doing. There was no time for birding or ringing after Saturday lunchtime with chores to do, football to watch and a friends BBQ on Sunday.

I save images in both raw and small jpg, then use the small low quality jpgs as a index to find and open the best RAW shots.

Adobe photoshop handles RAW files, if you don't have this you could get a 2nd hand copy of photoshop elements off amazon for about £18 last time I looked. I assume elements will also handle raw files but you would need to check first.

Hi Ian ,Canon cameras and probably others come with Raw software its not essential at first but is the better option. The main problem is you HAVE to take it with you all the time , else you will defo miss something !
Brian