An abandoned point-to-point meeting at Alnwick meant that I got to spend the afternoon at Druridge rather than spending my money with the bookies!

I was treated to a fantastic short-eared owl display. At least three SEO's were in the vicinity of Druridge this afternoon. It was great to watch, especially when two of them came across one another...they would have a bit of a set-to before heading off to hunt. This happened a few times over the Budge fields.There seems to be a lot of SEO's wintering in Northumberland this year, I hope a few stay to breed. It must be ten years since I saw them in the Cheviots. 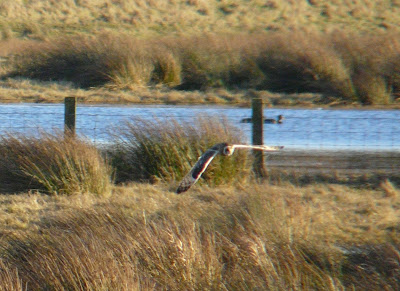 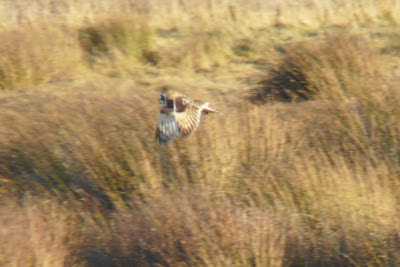 Whilst I was watching owl-fest,  I also saw a merlin flying over the big pool and Budge Fields and later, a peregrine, which was high at first, over the farm. It then headed north towards Hemscotthill scattering various flocks of waders, corvids and starlings as it went.

Offshore, I saw my first gannets of the year, four of them on the horizon, flying north. There was also a harbour porpoise in the Bay among the red-throated divers, mergansers and shags.There was also a red-breasted merganser on the Budge fields briefly.

I walked through the dunes for a while. I came across at least six 'thrushes anvils'  - this was the most impressive.
On Friday night, I drove home via the patch and scored a barn owl at High Chibburn Farm.